Why Saudi Arabia and the United Arab Emirates are backing military leaders who are killing demonstrators.

Mr. el-Baghdadi is the co-host of the podcast “Arab Tyrant Manual.”

Protesting a deadly military raid on a sit-in in Khartoum, Sudan, and American arms sales to Saudi Arabia at the White House on Saturday.CreditBrendan Smialowski/Agence France-Presse — Getty Images 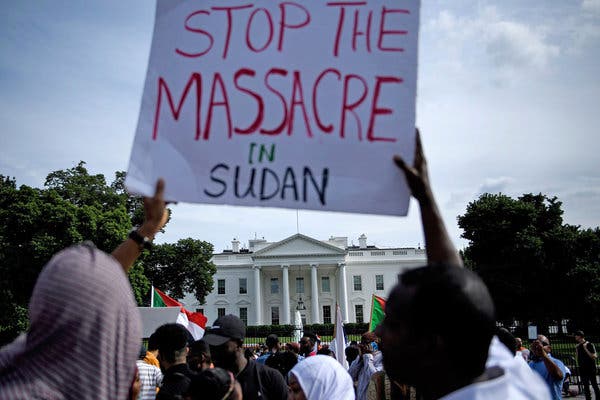 Since the Arab uprisings of 2011, Saudi Arabia and the United Arab Emirates have used their considerable resources to promote authoritarian governments run by military strongmen in the region. They helped crush Bahrain’s uprising, bankrolled a return to military dictatorship in Egypt, armed a rogue military leader in Libya and mismanaged a democratic transition in Yemen before launching a destructive warthere.

A ghastly new chapter in the Saudi and the Emirati counterrevolution against democratic movements in the region is unfolding in Sudan, whose generals have unleashed terrible violence on supporters of democracy.

On the morning of June 3, Sudanese armed forces attacked sit-ins in the capital, Khartoum, and elsewhere, killing more than 100 people and injuring over 500. Even though the internet has been largely blocked, reports and videos have trickled out: bloodied protesters

Please read the article from the source

April 12, 2019 admin9 Comments Off on The Washington Post | Sudan’s new ruler is no democrat — and he has Darfur to answer for

February 7, 2019 admin9 Comments Off on NewsY | The Internet Can Be Used To Empower — Or Silence — Mass Protests

May 2, 2019 admin9 Comments Off on BBC |Video | Sudan protests: ‘Smiles have returned to people’s faces’

We love Sudan. We believe in FREEDOM, PEACE and JUSTICE for all.