International News Coverage
May 15, 2019May 15, 2019 admin9
Sudanese protestors celebrate after an agreement was reached with the military council to form a three-year transition period for transferring power to a full civilian administration.
(CNN) — At least nine people have been injured at a pro-democracy sit-in in the Sudanese capital Khartoum, eyewitnesses say, as violence continued in the country in the wake of the removal of President Omar al-Bashir.
Sudanese soldiers wearing Rapid Security Forces uniforms stormed barricades at the site of the demonstrations outside army headquarters on Wednesday, eyewitnesses told CNN.
Gunfire could be heard, they said.
In a Facebook post, the opposition Central Committee of Sudan Doctors said that 14 people were wounded, including eight who had gunshot wounds.
The Transitional Military Council (TMC), which has held power since Bashir’s arrest last month, had no immediate comment. It was unclear who may have been responsible for the death.
The number of demonstrators has swelled at the site of the sit-in over recent days, becoming a point of contention for security forces as the location is just over half a kilometer (around 0.3 miles) from the presidential palace.
On Monday, at a different site, unidentified attackers opened fire on another group of seated demonstrators. 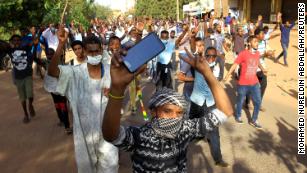 please read the article from the source

We love Sudan. We believe in FREEDOM, PEACE and JUSTICE for all.